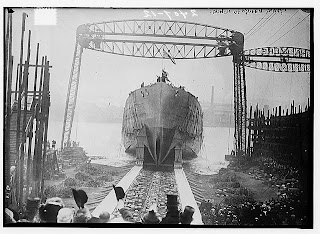 
As Time Goes By

Opulent, imposing, and crazy haunted, the RMS Queen Mary currently sits regally docked at the Port of Long Beach in California awaiting guests and a nightly crop of new ghost hunters. Her long career crossing the Atlantic began in 1936, from the John Brown shipyard in Clyde, Scotland and ferrying the world’s elite across the North Atlantic as the pride of the Cunard line until World War II broke out in Europe in 1939. The ocean liner was then commissioned to carry troops, which nearly doubled her capacity from 2,410 passengers to 5,500 aboard the 1,000-foot ship. Nicknamed the “Gray Ghost” after her painted camouflaged transformation to blend into the ocean waves, the Queen Mary carried more than 800,000 troops by the end of the war. While avoiding contact with enemy vessels during the war, the Queen Mary did not escape tragedy. On October 2, 1942, the ship ran afoul of one of its escort cruisers, the HMS Curacoa. Slicing through the smaller ship, 338 of the Curacoa’s sailors were left to drown as it was against wartime policy to return for survivors. After the war, the ship was refurbished and returned to its swanky roots in July 1947.

By the early 1960s, the glamour once associated with crossing the ocean by ship had faded as airline travel became more affordable. The Queen Mary, with its lack of air conditioning and outdoor pools, was quickly becoming a relic. In 1967, she was sold to the city of Long Beach for use as a hotel and maritime museum. After over 1,000 transatlantic crossings, the luxury liner had finally come home.

Since its docking, hotel staff and visitors to the ship have reported multiple hauntings. Recognized as one of the most haunted objects in the world, there have been an estimated 150 spirits roaming the Gray Ghost. Mysterious knocking upon the walls, disembodied voices, moving objects, and even the occasional appearance of a wet set of footprints on the deck of an empty pool add to the mystery of the grand old lady.

One unlucky ghost that is seen regularly is that of 18-year-old John Peddler. On July 10, 1966 the watertight Door 13 crushed Peddler during a training exercise in the propeller room in the part of the ship known as “Shaft Alley.” Because of the frequency in which people see the bearded young spirit wearing his blue coveralls and his location, he is known as the “Shaft Alley Spectre.”

Fancy a swim? The Queen Mary’s famous pools are paranormal hot spots for the pulse-challenged set. The first-class swimming pool, closed off for decades, has reports of ladies dressed in 30s-era swimsuits cavorting around the now-empty pool, as well as a woman dressed in a mini-skirt. Other activity includes seeing a pair of wet feet pad off to dressing room from the deck and hearing phantom splashing from the pool. In the second-class pool area, the shade of Jackie, a small girl who drowned, has often been heard and felt by guests. Jackie has also been seen in other areas of the ship.

The ghost of Senior Second Officer W. E. Stark has been found wandering the deck as well as his old sleeping quarters. In September 1949, Stark drank from an old gin bottle containing tetrachloride and lime juice, not realizing the bottle had been repurposed to hold the cleaning fluid. Falling into a coma, the officer died three days later only to return in spectral form.

Deep within the ship’s hull, near the bosun’s locker, investigators have recorded odd pounding noises. This was the area that crashed into the Curacoa, is that area of the ship caught in a residual haunting of that fateful day?

One of the more horrifying stories surrounding the great ship is of its days as a troop transport. While men readied themselves for war, their thoughts turned to their stomachs. The cook’s fare was reportedly so terrible that the men rioted, stuffing the cook into the oven where he burned to death. His final screams have been heard in the kitchen area; I guess no one thought to phone for pizza.

If staying at the hotel and wanting a little paranormal activity, request to stay near cabin B340. Legend has it that the ghost of a purser can’t cross over and makes an uproar. Faucets turning on by themselves and bedsheets being tossed across the room as well as other unexplained phenomena have forced the hotel to no longer rent this room to their guests.

A woman has been seen gently swaying to the music of a long dead melody in the area known as the Queens Salon, once the first-class lounge. Dressed in a flowing white gown, she’s thought to be attached to a particular piano, occasionally gliding into a waltz within the shadows of the room. Could it be one of the stars that traveled across the Atlantic in the heyday of the ocean liner? Celebrities such as Elizabeth Taylor, Mary Pickford, and Greta Garbo once sailed in style as well as dignitaries like Winston Churchill and the Duke and Duchess of Windsor as the Queen Mary cut through the rough waves of the Atlantic. My question is, who is the Lady in White waiting for?

As more reports of paranormal activity come in for this amazing vessel, the Queen Mary Hotel has embraced its ghostly reputation and offers spirit tours and investigations aboard the ship. Be sure to ask for a room with a boo.